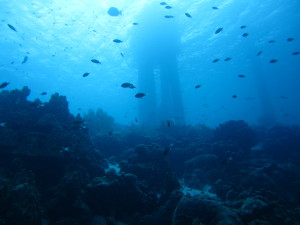 I am unabashedly in love with Bonaire. It is by far my favorite Caribbean island. It’s not just about the diving; it’s the pace, the rugged beauty, and the people of the island. In order to write this story for Yahoo Travel, I had to put my feelings aside just a bit and look objectively at all three islands in the ABC chain, as they are often called.

The three islands share a common history that includes playing integral roles during World War II. Until this year, I was not aware that the U.S. built the current airstrip on Bonaire during the war. Troops stationed there were important to the Allied effort to defend the oil reserves held on Curacao.

Curacao is considered the working-class island, Bonaire the quiet island, and Aruba the party and shopping island. All three have great diving, beautiful beaches, and friendly people. Air travel is relatively easy from the U.S. on United, Delta, and American, with numerous island hopper flights on lines like Insel Air between the three. Europeans have KLM flights as an option.

Smackdown: Aruba vs Bonaire vs Curaçao

Here is the Yahoo article as a PDF: ABCSmackdown