Who Needs Art? Every Room in This Bonaire Villa Has an Ocean View 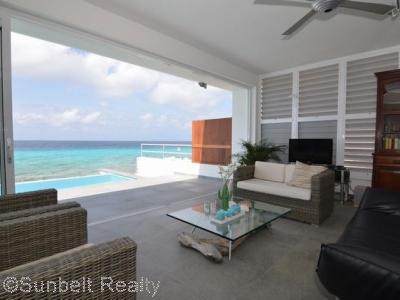 Imagine this as your living room!

But where the heck is Bonaire?

Tucked away in the Southern Caribbean, outside the hurricane belt, Bonaire is the “B” of the ABC Islands of Aruba, Bonaire, and Curacao. The 113-square-mile island is home to just over 16,000 people. Scuba diving in the pristine waters of the protected reefs surrounding the island attracts most of the tourist business that sustains the economy. A handful of cruise ships visit the port in the capital city of Kralendijk each week, but time slows to a peaceful pace between those arrivals. The best news here though, may be the price of ocean-front property when compared to better-known islands in the Caribbean. According to Sunbelt Realty Office Manager Annouk Loos, “One million and change gets you a villa just steps from the sea here; probably not on St. Maarten.”

Trendy neighborhoods feature a mix of Caribbean designs, but contemporary villas built by Dutch architects are the standouts along the island’s turquois coasts. I got a first-hand look at one such home located in the neighborhood known as Belnem, originally developed by crooner Harry Belafonte. 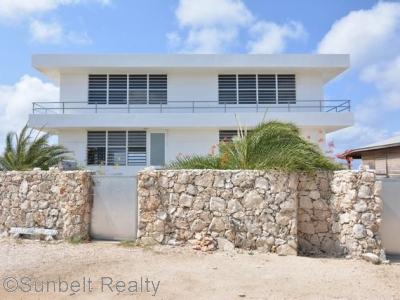 The villa is a compact three-stories encompassing just over 4,600 square feet of open floor plan where the spectacular view is the focus of every room. Floor-to-ceiling sliding glass doors afford ocean breezes and an outdoor feeling on the main floor that includes living, dining, kitchen, and master bedroom and bath. Two additional bedrooms with private baths are upstairs, also with endless views of the sea.

Agent Martijn Eichorn told us, “Dolphins are practically guaranteed. Just sit back and wait for them to pass by.” 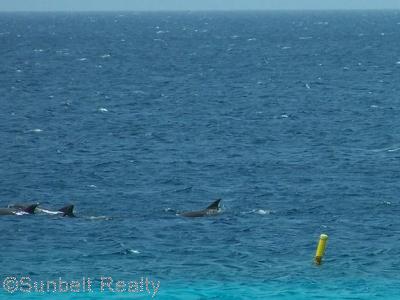 This house comes complete with a dolphin view.

You can spend your dolphin-watching hours lounging by the infinity pool or from any one of the three bedrooms. 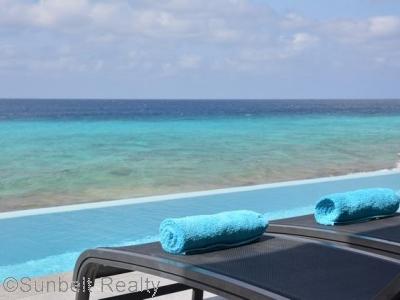 The open floor plan and large spaces lend themselves well to entertaining. Your guests can walk right into the sea, just beneath the pool deck.

Owning Bonaire real estate is relatively easy. The island is a Dutch municipality, using the U.S. dollar as its official currency. Most of the land at the shore is government owned as a means of controlling development. The land is then leased from the government on a renewable 60-year lease. The purchase process is relatively simple. American and Dutch citizens make up a substantial percentage of property owners on the island. U.S. citizens just recently gained the right to spend six months on the island in any given year, without having to meet residency requirements. 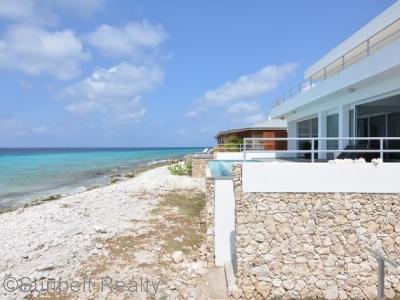 Step right onto the beach from the pool deck.

Vacation rentals are very popular among tourists visiting the island, making any purchase a potential income producer. Rental agent Kittie den Dekker showed us a few such rentals and explained that two-bedroom ocean-view villas are the most popular choices. Every detail of the rental can be easily managed by real estate offices like Sunbelt.

We spoke to an American couple who have owned a one-bedroom condominium home on the island since 2006. Even though they use the unit during most of the prime weeks, they said that their rental income the rest of the year offsets expenses.

United operates weekly direct flights from Newark and Houston. Delta also flies non-stop from Atlanta, while American flies from Miami to neighbor Curacao, where you can catch a short local flight into Bonaire. Car rentals are abundant, although the previously mentioned American couple we met opts to “share” a percentage of a vehicle with another couple. The island has a wide variety of restaurant choices and grocery stores stock both American and Dutch brands of food in addition to fresh produce, meats, and baked goods.

Sunbelt has a wealth of information about the island and real estate ownership in Bonaire on their website.