You can cruise with kids on almost any ship, but should you? 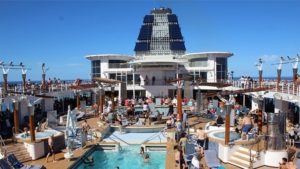 There are cruise lines that are perfect for kids– Disney goes without saying, and then there are a few lines that would just as soon not have them on board. Even among some cruise lines, certain ships are designed with families in mind, while others are not. Here’s a quick rundown of what to expect on some of the major lines when you choose to cruise with kids.

Royal Caribbean
Most of RCL’s ships are designed with families in mind. The mega ships have every imaginable activity for entertaining kids– from bumper cars to rock climbing to wave riding. There really is no doubt about whether or not they welcome you to cruise with kids. The classes of RCL’s ships that are a little less child-friendly would be the Radiance and Vision Class ships. We sailed on several of these ships when our daughter was young and they were fine, just expect a slightly quieter atmosphere and smaller groups of children than you would find on the bigger ships. Here’s where to start exploring Royal Caribbean’s family cruising.

Carnival
Carnival wants your kids. One look at the water slides perched high above the top decks and all doubt is removed. That does not mean that every ship will be packed with families all of the time. When school is in session in North America, expect fewer school-aged kids on board, but more toddlers and pre-schoolers. Pricing makes it easy for families to afford sailing with Carnival. Start your search for a family fun cruise on Carnival here.

NCL
Almost all of NCL’s ships have undergone renovations with the past two years. Some of those improvements were designed to make them more family friendly than ever before. There are bowling alleys, family suites, and meals that make it easy to cruise with kids. Here’s where to get the details.

MSC
MSC Cruises is a relative newcomer to the North American cruise market. I have not personally sailed on any of their ships, but their website is loaded with information about sailing with kids. I spoke with an MSC representative about everything they offer and was quite impressed. From baby laundry to special dining arrangements, they are attempting to turn cruising with kids inside out. Actually, they had me at LEGOS. Learn all about it here.

Celebrity
As you step up in class to the premium cruise lines, the family atmosphere wanes somewhat. That doesn’t mean that you shouldn’t take the kids, it just means that there will be far fewer perks designed to help you and the family make the most of the trip. Entertainment on Celebrity is usually PG-13 and R-rated options like comedians are relegated to later night hours. Teen hangouts are generally small, but well-staffed, and activities are age-appropriate and supervised. Celebrity does have some cabins that are well-suited for families. The family cruising page on their website has more details.

Princess
Princess has teamed up with Discovery Channel for materials for its family programs. That speaks volumes about whether or not they want you kids onboard. Princess is another line I have not sailed on, but the information on the company website leaves no doubt that children are welcome. Find out everything you want to know here.

Holland America
With a pervasive attitude of elegance at sea, Holland America would seem to discourage bringing kids along on your cruise, and yet, I found this information on the company website about family staterooms “Unique aboard ms Konigsdam.”

Oceania
Also not at the top of the list of family fun cruise lines, Oceania does offer an Alaska Explorer program on select sailings that look utterly fascinating for ages 5 to 15, particularly those with an inclination toward enrichment rather than crazy fun. Here’s the scoop on that program for 2017.

I dug around on several of the luxury cruise line websites and found no information about family amenities. When we sailed on Silversea, there were two small children onboard that we saw. One of those families had a nanny along for the trip, which pretty much sums up which lines probably don’t want your kids.

Read these stories for even more information to help you cruise with kids.

10 Things You Need to Know Before Planning a Family Cruise

Considering taking a baby or toddler onboard?

Read this first from Travel With Baby

Looking for Spring cruise deals to get you started?

Get started planning with Travel Pulse