“For my part, I travel not to go anywhere, but to go. I travel for travel’s sake. The great affair is to move. – Robert Louis Stevenson”

The happiest travelers honestly enjoy the act of getting from Point A to Point B. They know that travel is not just about reaching their destination. 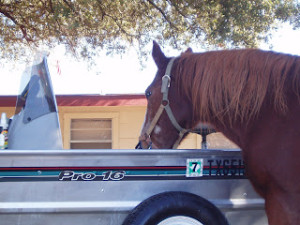 We could all learn a thing or two about travel from horses. For years we had horses for our resort guests to enjoy. One of our most popular horses was named Hoover the Mover. He got that name because he was slow. He was curious about his surroundings and thoroughly engaged in every step of every trail ride we took him on. From the minute you walked up to him with saddle and bridle he perked up. You could almost hear him ask, “Where are we going this time? Can we play in the water today?”

Other horses we used for rides were less than enthusiastic. There’s a term for horses that either won’t leave home willingly or that speed up on the second half of the trail in order to return home (their ultimate destination) faster. Horses that don’t enjoy the ride are called “barn sour.” It’s a hard habit to break, but it can be avoided with a little creativity in the first place. To avoid boredom we varied our route just enough to keep the horses wondering what was coming next and we often made sure that there was something special in store for them before they finished traveling for the day. When there were multiple rides to do, we treated all the horses to brushing and rub downs before the next set of riders.

Hoover liked Coca Cola, so that’s what he got between rides. He could spot a red aluminum can from a hundred yards. Give him a few minutes slurping Coke poured into the cupped hands of a giggling child and he was ready for anything.

Sometimes it’s just that simple. Change your route; take a closer look at your surroundings; stop for a Coke.

Sometimes it’s not that simple; sometimes there’s an airline involved. Airlines and airports have a nasty habit of leaving travelers feeling exhausted and defeated. The number one thing that will help keep you on the happy side of air travel is to remember that you are responsible for your own comfort. Take matters into your own hands and do anything and everything to ensure your comfort.

The only Shetland pony we ever owned was named Rusty. He was a barn sour little cuss if ever there was one. He hated leaving his pen. He hated giving rides. I’m not sure he liked anything except food, and he was even picky about that. Because he was afraid to leave the barn yard he never experienced the joy of splashing in the lake with Hoover. He never heard the laughter of the children he was there to entertain.

His stay with us was brief. He was an unhappy traveler that could not learn to enjoy the ride so we moved him to another home. I felt sorry for Rusty. Domesticated animals are not really in control of their fate, and I suspected that he was barn sour because his life’s journey had not been an easy one.

The point of his story here is twofold.

Life is the journey; don’t miss it by standing in the barn just because the trail might be rough

Rusty’s other lesson is that the world throws open welcoming arms for the happy traveler, but moves past the unhappy one with barely a blink.

Oh, and don’t kick people in the butt when you do leave the barn (especially the ones trying to help you.) That didn’t work well for Rusty either.