Why the Gaylord Texan May Be the Capitol of #CowboyNation

by Melinda Crow | Luxury, More to the Story, Travel 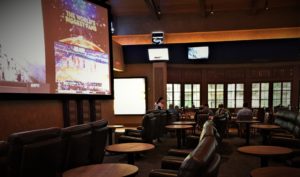 We recently had the opportunity to spend some time at the Gaylord Texan Hotel-– the Official Hotel of the NFL-leading Dallas Cowboys. The coolest place to be was inside the ICE! Holiday event, but the hottest spot was Texan Station Sports Bar and Grill. Here’s what we really thought.

The bar sprawls at the base of the Texan Tower inside the atrium, with seating both indoors and outside on the patio. There are plenty of screens to watch the Boys throughout the venue (more than 50), but the best seats in the house are the cushy recliner sofas up front beneath the 52-foot-wide screen. Advance reservations for those comfy seats are suggested on game days.

Because the team uses the hotel as its base on home game weekends, there’s a very real chance of seeing players and coaches almost anywhere in the hotel. We were there on a Monday night during a live broadcast of “The Cowboys Hour” on radio station KRLD. Jeff Heath and J.J. Wilcox were the featured players. The Dallas 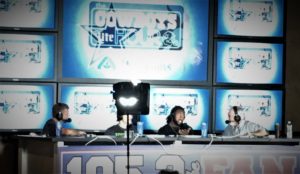 Cowboy Cheerleaders often pop into the Texan Station to help cheer the team and the crowd during away games.

The Station’s lineup of tap beers included local brews as wells as typical Texas favorites like Shiner Bock. The menu reads like typical pub grub of burgers and sandwiches but proved to be far tastier than average. We sampled the Texan Club a side of Mac n Cheese, and the most amazing Frito Pie ever to grace my palate. 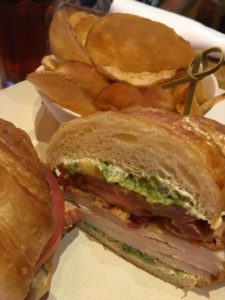 The club was enormous, with thick slices of smokey turkey, crisp bacon, guacamole, and crispy sprouts. The house-fried potato chips were crispy and lightly flavored. The mac was good but paled in comparison to the sandwich and the chili.

The Frito Pie is a heap of Fritos Scoops chips layered with the house-made chili, cheddar cheese, and topped with the signature beer cheese sauce and pico de gallo. The entire platter is then drizzled with serrano crema. It is far more than one average person can eat alone, so sink into a pair of those recliners and put the platter between you. 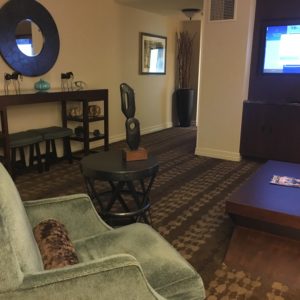 If a cheering crowd of strangers is not your idea of the perfect way to watch the game, consider a suite for you and a handful of your favorite peeps. Our suite had room enough for a dozen fans to enjoy the game in the living area, which had its own mini fridge, and tables for serving and eating food brought up from the Station in the atrium below. It’s hard to compare a hotel suite with a stadium suite in Jerry’s house, but at about a thousandth of the price, it could be the perfect place to host your next Cowboys game day party.

Want to know why I included Dallas and the Gaylord Texan as one of the most affordable destinations for 2017?

Read my round up on Travel Pulse.