Equinox comes in at 122,000 GT, compared to the smaller Summit at 90,940 GT. Equinox is a newer ship than her previous post—built in 2009, while Summit sailed in 2001. Equinox does 7-11 night roundtrips from Miami to the Eastern and Western Caribbean.

In 2016, we had the opportunity to sail on Summit while on assignment for a Forbes interview.  Here’s our look behind the scenes with her.

Captain Kate posted her hand off to Captain Charis on her Instagram account, reaching 42,364 viewers, many of whom wished her well on her new ship, while lamenting her departure from Summit.

Fans on Cruise Critic message boards have been speculating for weeks about the changeup—some of them having sailed with her on Summit multiple times. 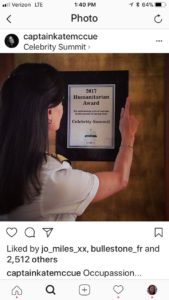 The handoff comes just a week following her receipt of a Humanitarian Award from the cruise line for her crew’s actions in rescuing six stranded sailors in the Caribbean last November.

Her crew sent her off with a surprise party onboard and a touching video of her time on Summit.