Why Scuba Dive? 12 Reasons Women Should Learn to Dive

Why I Learned to Scuba Dive 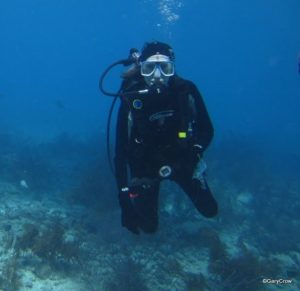 I learned to scuba dive twenty-five years ago. I did it because I had a love/hate relationship with snorkeling. I desperately wanted to see more of the ocean and the animals that live beneath the waves, but snorkeling didn’t get me close enough. Plus snorkeling isn’t always pleasant. From swallowing water accidentally to sunburned butt cheeks, I found plenty of reasons not to like it.

I can’t imagine my life without scuba diving. I have seen and experienced things far beyond my original expectations, and I never want it to end. Last year we met a woman in her eighties diving in Florida. She was diving with her daughter, who carried her gear for her. The daughter told us that she only carried the gear because her mom had had hip replacement surgery the year before. Seeing them made my heart sing!

Worldwide scuba certification agency PADI (Professional Association of Diving Instructors), cites that only 36% of all divers are women. I was actually a bit surprised by that number. I would have guessed the number was lower, at least among U.S. divers. I frequently see higher numbers of European women divers when we dive on Bonaire.

The sport may still be a male-dominated one, but women are catching up. Whether you have never given it any thought, or are teetering on the edge of diving in, here are some reasons to consider giving it a shot.

Why Women Should Learn to Scuba Dive 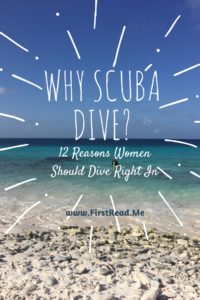 It’s a great excuse for traveling. This may be the number one reason for learning to dive. It is almost a guaranteed way to ensure that you travel more. Once you have invested the time and money into certification and gearing up for diving, it seems silly not to head out on an exotic vacation where you can use your skills. Think Puerto Vallarta, St. Maarten, and Fiji. Think about diving all over the world from a cruise ship.

It’s a reason to stay fit. Sometimes we all need a reason beyond “it’s good for you” to stay in shape. If you love diving, it’s usually enough to keep you motivated.

And it KEEPS you fit. A week of intensive diving is like workout boot camp, only way more fun. I always return from dive trips feeling stronger than when I left.

There are no phones. The ability to escape the demands and chaos of the digital world for an hour at a time is my favorite reason for diving.

You aren’t anybody’s “Mommy” underwater. When you scuba dive, your focus is on you, your dive buddy, and the specifics of the dive. And that’s okay. Moms need to take off the Mommy hat once in a while. It gives you time to remember who you are and what you love. Does that mean that you shouldn’t dive with your kids if they are old enough? Quick story to answer that question.

Our daughter dives, but is a bit intimidated by the open ocean. There are only two things she has ever been afraid of: sharks and bears. The very first time she dove with Gary and me in the ocean, we encountered two rather curious Caribbean reef sharks. She was only thirteen at the time and after I got her calmed enough to stop hyperventilating (a bad thing when you are diving), I motioned to her that we would start the swim back to the boat. I turned to signal the same thing to Gary, who was too busy snapping photos of the sharks to get the message. When I turned back around, I could barely make out daughter in the distant blue swimming away at Olympic-record setting speed. At least she was headed in the right direction.

Mommy moment. There really was no choice but to swim hard to try to catch her and leave Gary behind as shark bait. It’s a story that the three of us will be telling for the rest of our lives, made even better by the fact that Grandma (Gary’s mother, of course) was waiting on the boat and had her own Mommy moment upon learning that we had left him behind with the sharks.

My suggestion is that it’s okay to dive with your kids some of the time, but don’t miss out on the freedom of diving without them as well.

Seahorses. This is actually a reason for anybody to want to dive. What’s not to love about a seahorse?

Turtles. I have been known to laugh out loud underwater (yes, that’s possible) at the leisurely antics of sea turtles. I think it may have been the deciding factor for my sister-in-law to start diving. After encountering them while snorkeling in Hawaii, she made the plunge to have a deeper look beneath the waves.

It’s way cooler than snorkeling. It just is. And it’s easier. When diving is not an option, I still snorkel, but it’s not my favorite thing to do in the water. It somehow takes more coordination than diving. It makes me feel clutzy. It helps if you have the right equipment and the reef is shallow enough to see fish up close, but it’s still not as cool as diving.

It builds confidence. Each and every dive gives you a boost of confidence. There is always room for improving your skills or tackling new challenges. Certification agencies like PADI are right there to help with extended educational opportunities, whatever your scuba diving goals are.

Guys do it. So why shouldn’t we?

We are actually better at it than most guys. Most guys that scuba dive frequently with women will tell you that women divers are better at buoyancy control and at air consumption than men. Gary used to think my air gauges were wrong because I always have more air left in my tank than he does. After I easily outlasted a seasoned dive master on an 80-minute shallow dive with plenty of air left in my tank he realized that I simply breathe more efficiently than most guys.

Guys can’t save the oceans by themselves. Getting beneath the waves for a first-hand look at trash accumulations, coral bleaching, and damage caused by ships is the best way to realize that the oceans need all the help we can all muster.

Find out what journalist Mia Taylor has to say about the state of our oceans.

Ready to start searching for the perfect scuba vacation?

Check out this extensive list of places you can snorkel or scuba OTHER than the Caribbean.