7 Reasons I am Learning to Speak Italian 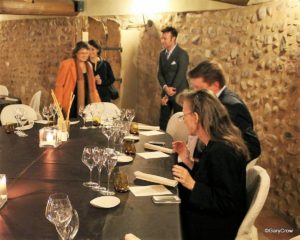 Before the 2015 Expo Milano, Gary and I had the opportunity to spend several days in Milan and in the Franciacorta wine region with an eclectic group of journalists. Two were from France, two from Russia, three were from Germany, one other was American, and one was a British expat living in Italy. Together with our Italian hosts, we ate and drank our way through a crash course of the history, art, music, and architecture of Northern Italy as it related to the opening of the Expo.

One evening as our group sat around an enormous restaurant table dining with the owner of a successful winery, it occurred to me that every person at the table with the exception of the three Americans spoke more than one language. The Russians spoke three.

I am not always known for restraint.

I turned to the vintner, who was seated on my right and asked, “Do you find it arrogant that the only people at this table who speak only one language are the Americans?”

Somehow over the multilingual chatter around the table, everyone heard my question. Everyone waited for the answer. The vintner, ever the gracious host, assured me that English is the language of the world, particularly the language of the business world.

“Why should you learn our language, when we must use yours to do business everywhere in the world?”

I don’t want to be that person

I believe his words were true; English is used by business people throughout the world. But I also think that his answer stopped short of the full truth. It is arrogant to travel the world and not attempt to connect with the people we encounter on those travels as if we can’t be bothered. I decided that very evening not to continue to be that kind of traveler.

Italian food is my one true weakness. All of it. It occurred to me that there is so much to learn about Italian food that requires a better grasp of the language than what I can learn from the local Italian restaurant at home. And there is nothing sadder than a Texan staring at an Italian menu wondering what the heck bistecca means.

Italian is music to my ears

I know it sounds trite, but there are languages that somehow just click inside your head like tumblers in a lock. Think about how you feel about certain kinds of music. Maybe classic rock is your style, or maybe country gets you humming. Italian is my musical language of choice. If you decide to learn a language yourself, try to listen to several before you decide which one to start with. You may be surprised by your unconscious preference to one over another, much the same way you prefer one musical style over another.

I live in Texas. I know Spanish words. I know Spanish speakers. I know it is far more arrogant of me to ignore Spanish than to ignore Italian. There was simply a stronger desire to take on a language that seemed somehow more foreign than the second language I grew up around. And once I have Italian under control, I will tackle Spanish. I promise.

My favorite island on the planet is Bonaire. We have been visiting Bonaire annually for the better part of a decade. As a special municipality of the Netherlands, a large number of people on the island speak Dutch. If you haven’t looked at the written form of the Dutch language you will have to trust me when I tell you that it is some kind of complicated. It bears no resemblance to English that I can discern. And the spoken language? Aach! My Dutch friends will simply have to continue to forgive my ignorance and my arrogance.

I speak only one language, but it is not for lack of trying. I have had brief spurts of energy directed at learning Spanish using various workbooks and computer programs. During our homeschool years, my daughter and I attempted to learn basic Spanish together. We are both fluent at finding a bathroom and we can curse at one another.

Those previous attempts at learning a second language left me feeling like perhaps I simply did not have a gift for language.

Except that I seem to have a pretty firm grasp of at least one language.

It’s all about the tools 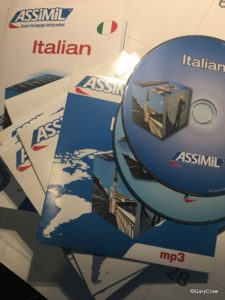 I place the blame for my previous failures on poorly designed tools. To learn Italian I am using a program called Assimil. There is no rote memorization. The learning is based on concepts similar to the way we all learn our first language– by assimilating it into our daily lives. Assimil is not new, in fact, it has been around since 1929 and is the top language learning method in Europe, where, as I learned, almost everyone speaks more than one language.

The system, which is the equivalent of one full year of a college language course, involves a passive phase of primarily listening to conversations while reading along in both Italian and English. The active phase will then build on what your brain has absorbed while you listened.

I am only on lesson 30 of the 100 lessons, so I can’t claim true success yet, but I am learning. On a recent trip to Italy, I was not confident enough to speak more than basic greetings, but I had a far better grasp of directional signs and menus than on our previous travels there.

Stay tuned for updates as I continue to progress. In the meantime, what language do you want to learn?

Disclosure: I was provided the Assimil language program at no cost for review purposes. I received no monetary compensation for the review and opinions are my own.

I discovered Assimil from fellow travel writer Johnny Jet who is learning French.

Read about his experience with Assimil

These photos may be enough to make you want to learn Italian too!

Milan: The Duomo and the Galleria in Photos