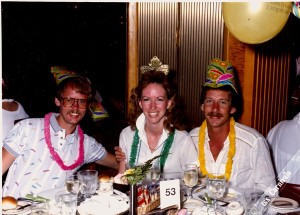 And yes, we even wore the silly hats.

My first cruise was aboard the Carnivale, one of Carnival Cruise Line’s three ships. Yes, three. I have long said that if we had spent that money on Carnival stock instead of a three-night cruise to the Bahamas our bank account would be healthier. But I don’t believe for a minute that our travel experience bank would be.

Our buddy Chuck went along for the trip. We first spent a day at Epcot— the new theme park at Disney World, visited Kennedy Space Center, then drove the Turnpike to Miami to catch our ship. Florida was new to us; cruising was new to almost everyone. We boarded the 31,000-ton ship feeling like royalty. The food was the best we’d ever eaten and cheap fruity alcohol never stopped flowing. Our tiny cabin on Deck 2, had four built-in bunks and a bathroom so small that we had to dry the toilet after a shower.

Nassau was exotic and fresh. There was no port facility, no security along the pier, and I don’t recall any organized excursions.  We rode the local bus through parts of town with no running water and took a booze cruise snorkeling (some things haven’t changed). The ship overnighted in port, allowing us to gamble in the local casino late into the night. The cruise was the highlight of our young lives. It changed us. We all eventually became scuba divers, certainly in part because of the wonders we saw through leaky masks, breathing through cheap snorkels that we hoped were at least a little sanitized by the rum punch. Gary and I became cruisers for life; Chuck became a scuba instructor.

As business boomed, cruise ships grew in size– reaching well above the 100,000-ton mark, each carrying thousands of passengers to ever more exotic destinations. These were the “Get Out There” days in the industry. The cruise lines showed us a Caribbean we had never seen before. New ports like Roatan, Belize City, and Playa del Carmen, and private islands owned by the cruise lines suddenly became our destinations of choice. We could cruise through the Panama Canal, or through the glacier-strewn straights of Alaska.

For me, cruising became the easy way to show our young daughter the wonders of the Caribbean. Grandma came along most of the time. The four of us experienced what felt like the whole world together. It changed us. Our daughter developed an incurable wanderlust and knows no fear of new places. Gary and I dove every possible Caribbean port (most more than once), falling ever deeper in love with the wonders of the sea. And Grandma now leads bus tours of senior citizens on grand adventures across the country. The four of us still spend countless hours recalling our cruise adventures.

My most recent cruise was aboard Silversea’s Silver Spirit. We first spent a day in Istanbul, visiting the spice market and marveling at mosques. Turkey was new to us; cruising was not. We boarded the 36,000-ton ship feeling no less like royalty than we did on that first 80’s cruise. The food was some of the best we’d ever eaten and carefully chosen wines flowed endlessly. Our suite on Deck 10, featured a bathroom and walk-in closet slightly larger than the cabin we shared with Chuck all those years ago.

Nafplion and Myrina were quaint and quiet. We visited ancient cities, sipped Greek beer in the shadow of the Parthenon, and even managed to squeeze in a scuba dive in the waters of the Aegean. It changed us. Cruising without a butler may be out of the question now, for one thing. But as always, it’s deeper than that. We discovered a burning desire to see more World Heritage Sites and an appreciation for the quiet of the Greek countryside. 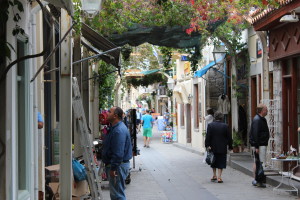 There is no room for the words “typical” or “ordinary” when describing cruising today. Choices range from floating mega resorts like Royal Caribbean’s Quantum of the Seas and Carnival’s upcoming Vista to luxury exploration ships like Silversea’s Silver Discoverer visiting ports we previously never dreamed of visiting by cruise ship. MSC is bringing Mediterranean-style cruising to North America and Virgin Cruises will soon bring us Sir Richard Branson’s vision of cruising. You can cruise the rivers of the world with Viking River Cruises. And soon Regent Seven Seas will wow you with a suite with its own spa. Cruising has changed.

On board the Silver Spirit, we shared dinner with the Staff Captain. He grew excited when we told him the story of our first cruise– it seems that his first cruise ship experience was also aboard one of Carnival’s first three ships. We laughed at his stories of the life of a young sailor amid the party crowd onboard.

Two things remain certain in the world of cruising, the ships and destinations will continue to evolve, and whatever cruise line we choose to sail on, whatever the tonnage of the ship, however small or large the bathroom is, and wherever it carries us to– it will change us.

Why aren't YOU cruising?