#TravelTruth: There Could Be Snakes in the Toilet—Expecting the Unexpected When You Travel

When we are not traveling, Gary and I operate a very small lakeside cabin resort. It makes us better travelers—knowing what goes on behind the scenes in the hospitality business. It also has given us a wealth of interesting stories.

#TravelTruth from an Inside Perspective

What I am about to share is an inside story. Resort owners and innkeepers worldwide have our little behind-the-scenes secrets told only to other innkeepers we really trust—often at end-of-season parties where we try to top one another’s tales of guest or maintenance horrors. This is one of ours.

One afternoon while cleaning the bathroom floor in one of the cabins, our housekeeper glanced inside the toilet. Something in the bottom of the bowl caught her eye.

Knowing she had already cleaned the darn thing, and thinking that she must have accidentally dropped something without realizing it, she leaned in for a closer look. All five-foot three inches of her probably became airborne at that point because just as she contemplated getting her brush to poke the object, it moved. It was a snake.

I heard the shriek, saw the hasty exit from the building, and went to investigate.

I developed immunity a long time ago to housekeeper stories of giant spiders leaping from the bushes, so I calmly went to see what was actually lurking in the toilet. It was a snake.

And not a small one, I might add. Two eyes, forked tongue, scaly skin, the works. Right there below the water, in that part of the toilet where things usually disappear with a whoosh.

We promptly invited a skeptical Gary to the viewing party, but apparently, Mr. Snake felt that the room was a little crowded at that point, and poof, he disappeared without even a ripple of the water. Vanished. We waited. Gary sent me for tongs from the kitchen. No snake.

A plan developed to close the door and come back quietly with tongs at the ready. He had to come up for air sometime, didn’t he? To make a very long story short, we tried everything we could think of to entice that damn snake out of that damn toilet. For two weeks. Two weeks! I’m talking cheese, pork chops, and tuna.

We blocked the bathroom door with towels and waited. Got ants. No snake. We saw glimpses of him once or twice smiling at us from the bottom of the toilet the first week, then nothing. He left the premises as quietly as he had arrived.

Why am I telling you this story?

I certainly don’t want to cause you toilet issues, but I bet you’ll be checking now before you sit won’t you? No guest ever saw the snake, but it could have just as easily been someone other than the housekeeper who found our friend.

The happy travelers among us would simply have been shocked, accepted the fact that unexpected stuff happens (particularly in toilets), and graciously moved to another cabin, knowing that they had a story to tell for the rest of their lives. I shudder to think about what the unhappy traveler type might have done.

I envisioned bad online reviews, complaints to the BBB and the health department, credit card disputes, maybe even a lawsuit. A snake in the toilet? That’s probably good for a year or more of unhappiness for all involved, don’t you think?

The point is that if you travel, you are going to encounter some stuff you did not expect. Travel is better when you get a jump on sneaky snakes in the toilet by expecting the unexpected.

The Bad Stuff You Should Always Expect 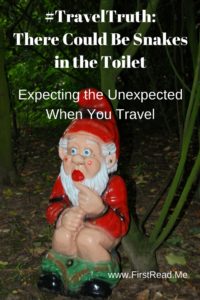 #TravelTruth: The Weather May Not Cooperate
It will always be hotter, wetter, windier, colder, or more uncomfortable in some way that you expected. Plan for it and stay happy when everyone else around you starts to whine.

#TravelTruth: There Will Be Delays
From traffic snarls to flight attendant contract negotiations, something is always out there lurking, just waiting for the chance to keep you waiting. If you build extra time into your itinerary you’ll be one step ahead of the delay monsters.

#TravelTruth: Hospitality and Tourism Employees May Be Short-tempered, Overworked, and Underpaid
Somebody is going to be less than pleasant to you. It’s a fact of travel. It’s a fact of life. The goal is to not make a big issue of it and especially not pay it forward to the next person.

#TravelTruth: Accommodations May Not Look Like They Did on the Internet
This is absolute #TravelTruth. Sometimes it is the fault of the accommodation’s website, but often it is because the planning stages of a trip are like the early days of a romantic relationship—we are blind to clearly visible minor flaws while in the throes of our destination crush. The best advice I can give you is to expect less, travel with Lysol, and learn to adapt.

#TravelTruth: You May Have Minor Illness
Gary and I have traveled with colds, sprained ankles, strained backs, eye infections, bladder infections, upset stomachs, broken toes, dislocated shoulders and torn ear drums. We learned a long time ago that “Farmacia” is the second most important word in the Spanish language (“baño” being the most important). We also learned to travel with a very extensive first aid kit stuffed with a remedy for almost anything. We carry eye drops, ear drops, and cough drops as well as antacids, pain killers, stretch bandages, and an ice pack. The idea is to keep minor illnesses minor and to stay as comfortable as possible while you endure. We also travel with insurance.

#TravelTruth: Things are Going to Cost More Than You Thought
Taxis, tours, drinks, food, tips— it all costs more than you thought it would way back when you were sitting in your living room in your PJ’s being seduced by that Internet sale on airfares to the Caribbean. Unless you are going somewhere to visit relatives take 20% more cash than you think you need and take two credit cards with plenty of open credit left on them.

We travel because we crave new experiences, new faces, or new connections with familiar faces. But new is messy. The only option if you travel is to get used to the possibility that things will not go exactly as expected and push through.

If you really wanted a life with no surprises, wouldn’t you just stay home, where you at least have a chance of controlling your surroundings?

The solution is to plan as best you can, be flexible, and learn to smile back at snakes in the toilet.

Can You Handle More #TravelTruth?