So what’s a Viking combo cruise? It’s a marriage made in heaven–you begin a European journey on board one of Viking’s river cruises, before being whisked away to a Viking Ocean ship for the remainder of your voyage.

Besides the sheer novelty of the concept of combining both a river and ocean cruise in one booking, the advantages for passengers include a pre-arranged transfer between the two ships, and the obvious need to only purchase one airfare for two distinctly different cruise experiences.

Viking has not yet formally announced the new plan, but two sailings are available for booking on the Viking website.

The combo cruise first begins in Basel, Switzerland on the Rhine on July 5, 2018. On day eight of the river portion of the cruise, you arrive in Amsterdam where you will transfer to Viking Sun for a coastal cruise in the North Sea and through the fjords of Scandinavia before disembarking in Bergen, Norway.

The trip covers five countries and includes eleven guided tours in the cruise fare for the fifteen-night journey. With Viking’s current 2-for-1 fare, prices begin at $5,998 per person.

The second combination voyage takes place in the fall and also begins in Basel, Switzerland. The Rhine River portion of the trip begins on September 29 of next year, and also takes you to Amsterdam for transfer to a Viking Ocean ship—this time the Viking Sky.

The ocean portion of the combo sails to Paris (Le Havre) before heading south through the Atlantic toward its final port of Barcelona. The sailing includes two sea days and four ports of call before overnighting in Barcelona.

The second of Viking’s combination ocean and river cruises stops in seven countries and includes thirteen guided tours. Rates for the eighteen-night sailing start at $6,298 per person. 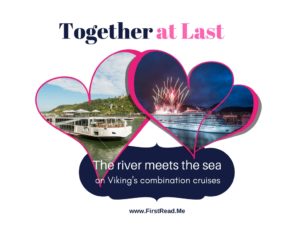 Get the details here >>